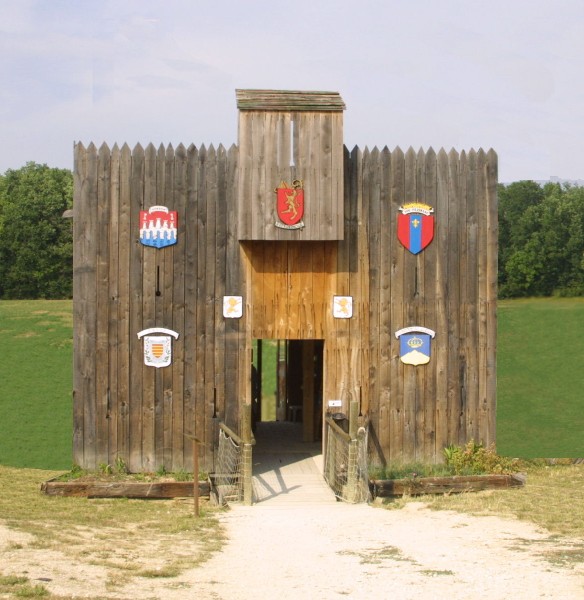 Like most periods in history, the era of knights evolved gradually. The term "knight" originates from the Anglo-Saxon name for a boy: "cniht". Indeed, most early knights were not much more than hired "boys" who performed military service and took oaths of loyalty to any well-to-do nobleman or warlord offering the most promise of money or war booty.
In the chaos and danger of post-Roman Western Europe, the population had very little organized governmental protection from brigands and conquering warbands. Knowing there was safety in numbers, local lords (who could afford it) gathered around them young, fighting-age men to fend off rebellious vassals or conquering neighbors. These men, in turn, were rewarded with war booty for their service and loyalty. Soon, grants of land were made so the young soldiers could receive an income from those lands and afford the high cost of outfitting themselves with the accoutrements of war, such as horses, armor, and weapons. The era of the medieval knight had begun.
It wasn't long before some knights began to treat their land grants as hereditary rights (usually transferring ownership to the eldest son upon death), thus beginning the rise of knights as a "landed" class whose importance went beyond simply being a military "free-agent". Knights soon found themselves involved in local politics, the dispensation of justice, and numerous other required tasks for their sovereign, or liege lord.
go to the site: www.knightsandarmor.com/history.htm

Medieval Jewelry
The transcendent, timeless beauty of medieval jewels has not diminished with the passing of time. Made from the most precious and beautiful materials known to the medieval world—gold, silver, gems, pearls—, they also captivate modern beholders.
Few medieval jewels have come down to posterity. Because of the inherent value of their materials, many were destroyed, or rather, constantly recycled: they were melted down and reused in newer, more fashionable pieces. However, the significance of medieval jewelry goes far beyond its material or decorative value. Precious objects communicated complex meanings and connotations and thus constituted an indispensable part of the medieval language of signs.
go to the site:
ww.ceu.hu/medstud/manual/SRM/jewel.htm#raw
Pubblicato da Italia Medievale a 06:34 Nessun commento:

Medieval sights and sounds
go to the site: www.evergreen.loyola.edu/~fbauerschmidt/HN240_00_images.html

Medieval Monastery in Taillin
In the Middle Ages, universities and the Cologne Monastery, established in 1221, were the centre of the Dominicans and of Western European science. It was in the universities where most recognised scholars of that era held their lectures and gradually, educational traditions of the Paris, Oxford and Cologne scholastics reached Estonia with the Dominican friars in the beginning of the 13th century.The Mauritian Institute, the Center of Medieval Spirituality and the Tallinn City Museum have put together a set of programs for tourists such as the :

SECRETS OF THE MEDIEVAL MONASTERY
It is a program that introduces the Dominican Monastery in Tallinn by exhibiting parts of the building that have firmly stood the test of time and are of great historical interest. As confirmed by art historians (E. Tool-Marran, The dominican monastery in Tallinn, p. 49), „rooms still remaining from the three-winged Claustrum can be found in the east wing where the most specific and also the most important rooms of the monastery – Sacristy, chapter room, dormitory for monks, prior's living quarters, library, refectory, etc. – were located
go to the site:
www.mauritanum.edu.ee/turism/english.html