Medieval cooking Regardless of the period being studied, facets of daily life are frequently among the most difficult subjects to pin down and examine. The same is true when studying medieval eating habits. In an age when writing materials were costly and literacy limited to an educated minority, a scarcity of documentation on what must have to contemporaries appeared trivial detail is only to be expected. Therefore, for much of what we claim to know of customs in the Roman, Viking and Anglo-Saxon settlements in Britain, we rely on archaeological evidence and conjecture based on illustrations, literature and other material only peripherally related to gastronomic arts.Manuscripts of more direct relevance to the study of cookery appear in the late 13th century. For England, undoubtedly the most significant would be the Forme of Cury, a late 14th century recipe collection; a great deal of dietary information can also be found in parts of the alliterative poem Piers Plowman. Castle records provide an insight into which foodstuffs a household purchased and in what quantities; dictionaries and phrasebooks provide lists of names for food, indicating items that stewards might have left out of their accounts, due to their being produced locally. Medical texts provide additional evidence, with their advice on the wholesomeness of different foods and maintaining a medieval physician's idea of a balanced and healthy diet.
go to the site:
www.keskiaika.org/kirjasto/food/intro.htm
Pubblicato da Italia Medievale a 07:30 Nessun commento:

Medieval Schools
There were many different kinds of schools in medieval England\, though few children received their sometimes dubious benefit. There were small, informal schools held in the parish church, song schools at cathedrals, almonry schools attached to monasteries, chantry schools, guild schools, preparatory grammar schools, and full grammar schools. The curriculum of theses schools was limited to basics such as learning the alphabet, psalters, and religious rites and lessons such as the Ten Commandments and the Seven Deadly Sins. The grammar schools added to this Latin grammar, composition, and translation.
Go to the site:
www.britainexpress.com/History/Medieval_Schools_and_Universities.htm

Ibn Battuta: a great traveller
To the world of today the men of medieval Christendom already seem remote and unfamiliar. Their names and deeds are recorded in our history-books, their monuments still adorn our cities, but our kinship with them is a thing unreal, which costs an effort of imagination. How much more must this apply to the great Islamic civilization, that stood over against medieval Europe, menacing its existence and yet linked to it by a hundred ties that even war and fear could not sever. Its monuments too abide, for those who may have the fortunate to visit them, but its men and manners are to most of us utterly unknown, or dimly conceived in the romantic image of the Arabian Nights. Even for the specialist it is difficult to reconstruct their lives and see them as they were. Histories and biographies there are in quantity, but the historians for all their picturesque details, seldom show the ability to select the essential and to give their figures that touch of the intimate which makes them live again for the reader. It is in this faculty that Ibn Battuta excels."Thus begins the book, "Ibn Battuta, Travels in Asia andAfrica 1325-1354" published by Routledge and Kegan Paul
go to the site:
www.ummah.net/history/scholars/ibn_battuta/
Pubblicato da Italia Medievale a 08:23 Nessun commento:

The English Castle
England had known fortifications before the advent of the castle. The Iron Age peoples of Ancient Britain fortified hilltops with massive earthworks, such as Maiden Castle in Dorset, for tribal defense. The Romans dotted the countryside with innumerable military encampments and built the impressive chain of fortresses, known as the Saxon Shore forts (e.g. Portchester Castle, below), to guard South-East England from Saxon raiders in the 2nd and 3rd centuries AD. The Normans later built castles within the walls of two of these Roman Saxon Shore forts, at Pevensey in Sussex and Portchester in Hampshire. The Anglo-Saxons and the Danes entrenched their towns behind earthen banks and timber palisades to create fortified towns, burhs, from which is derived the modern word "borough." Yet, all these structures were for, essentially, communal purposes. What distinguishes the castle from these and other, later fortifications is its function as a private residence.
go to the site:
www.britannia.com/history/david1.html
Pubblicato da Italia Medievale a 07:17 Nessun commento:

Travel Literature
Travel literature is a popular genre of published work today. However, it is rarely a dispassionate and scientific recording of conditions in other lands. As a literary genre, it has certain conventions. Readers are generally seeking the exotic, the other, the different in the places they explore in literary mode. We want to learn about the headhunters of Borneo, not the oil rig workers; the wildebeest and gazelles of Africa, not the various species of rats; the temples of Greece, not the takeaway hamburger restaurants. We would rather see the inhabitants of a Swiss mountain village dressed in anachronistic clothes that they wear for an annual culture festival than in their jeans and T-shirts. We may also be seeking our own origins and trying to tie our culture and customs to a sense of place. Australians and Americans lap up literary tours of the historic monuments of England and Europe. We mostly are not terribly interested in their football teams or descriptions of the London Stock Exchange. We demand disjunctions of time, place and continuity, not accuracy.
go to the site:
medievalwriting.50megs.com/word/travel.htm
Pubblicato da Italia Medievale a 06:27 Nessun commento:

Ballads in Medieval Europe
In twelfth century Europe, there was no television, no radio or recorded music, no computers or telephones, no newspapers or magazines.Books are rare, hand-written documents and they were in Latin, a language only a few, very educated people could read. Professional musicians lived in the households of very wealthy noblemen, or traveled from place to place, as did wandering actors who presented plays based on stories from the Bible, but professional entertainment was a rare luxury for most people. In such a world, it was important to be able to make your own entertainment. People told stories, played riddling games and played chess a few other more simple games that have survived until today. To find out about some games of the Middle Ages and how to play them, visit Tara Hill Design's Rules for Medieval Games page . The games at the bottom of that page, Nine Man's Morris or Merreles, Fox and Geese and Sailor's Solitaire, were all played in 12th century Britain. A stone board for playing Merreles was recovered when Jedburgh Abbey was excavated by archaeologists in 1984. Jedburgh is very close to the places where An Earthly Knight is set.
go to the site:
www.janetmcnaughton.ca/ekballads.html
Pubblicato da Italia Medievale a 06:37 Nessun commento: 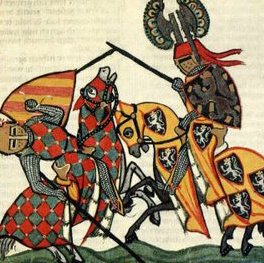 Medieval Sports What kind of sports were practised by the people of the Middle Ages? The people of the Middle Ages enjoyed many holidays; it has been estimated that, besides Sundays, about eight weeks in every year were free from work. There was time for sports. But most of the sports played during the Middle Ages were targeted towards increasing the fighting skills of men. Middle Ages Feudalism was based on the exchange of land for military service. Lords were expected to provide trained soldiers to fight for the King. It was imperative for Knights to acquire excellent fighting skills. The Medieval Sports in the Middle Ages were therefore designed to provide weapon practice and to increase a man's fitness.
go to the site:
http://www.middle-ages.org.uk/medieval-sports.htm
Pubblicato da Italia Medievale a 07:21 1 commento: