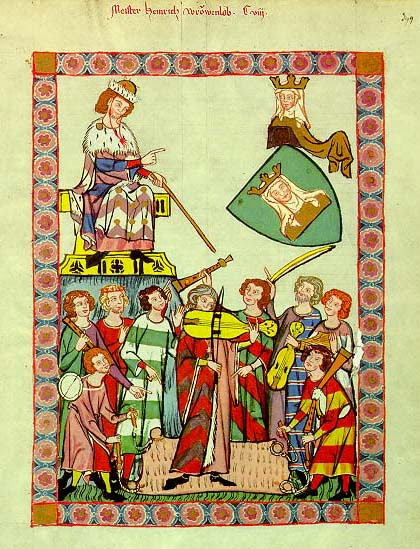 Medieval German Literature
The literature of any culture may be said to begin a long time before its first extant works were written down in manuscript form; the earliest manuscripts of German literature extend back to the eighth century. We can be sure of this because there exist in other Germanic languages, notably Gothic, Old English, and Old Norse, similar works that clearly belong to a common Germanic tradition. The events they recount, so far as they are historical, took place during the «Völkerwanderung», the mass-movement of Germanic peoples (375-568), that is, before the Germanic tribes split into the people we now designate as German, Scandinavian, and Anglo-Saxon. There can be no doubt that these troubled times gave impulse to creating songs, sagas, and legends, and that singers and poets?often summarily referred to as ´skopsª?gave them artistic form. Historical events were interwoven with mythological elements and motifs from other cultures, but there is a great deal of material common to all the Germanic literatures. It should be noted in this context that the appearance of any literature of note was contingent upon the de facto, if only superficial, incorporation of the Germanic tribes into the Church (DeBoor). It was during this early period that there developed the peculiar form known as alliterative poetry or «Stabreimdichtung», whose characteristics are the use of regular alliteration of stressed syllables and a four-beat line, associated in Norse poetry with the poetical device of kennings or descriptive periphrases of nouns.Although we are aware of the existence of this body of oral poetry and can trace its influence on works that are extant, it is risky to attempt to reconstruct Germanic works or to posit a «Germanic hero» type, in the sense that such heroes are supposedly endowed with qualities not found in other literatures. In fact, the heroes of Germanic works, so far as we can determine, share many of their characteristics with early heroes of other cultures. Nevertheless, they do possess some distinguishing moral and social values which will be considered later.
Medieval literature in Germany is generally divided into Old High German, early Middle High German, the classical period of Middle High German literature, and later Middle High German Literature, often also including earliest New High German Literature. The first of these divisions, which covers the period from about 775 to about 1075, is more of a linguistic than a literary division. It actually includes works written in several dialects, and one of the most important poems of the period, the Heliand, is written in Old Low German (that is, Old Saxon). The second period encompasses widely divergent literary monuments of the late eleventh and early twelfth centuries. The classical period, during which almost all the outstanding works of medieval German literature were written, ex-tends from about 1170 to 1230. Its important cultural and literary characteristics are clearly