Investigations in Lalibela, Ethiopia, are revealing that Africa's most important historical Christian site is much older than previously thought. Up until now, scholars have regarded the spectacular complex of 11 rock-cut churches as dating from around A.D. 1200, but new survey work carried out by a British archaeologist suggests that three of the churches may have originally been "built" half a millennium earlier as fortifications or other structures in the waning days of the Axumite Empire.

"The discovery will completely change the way historians perceive the origins of Africa's most famous indigenous Christian site," says David Phillipson, professor of African archaeology at Cambridge University. His research, to be fully published next year, suggests that two of the churches, those of Merkurios (a local Ethiopian saint) and the archangel Gabriel, were initially carved out of the rock as some sort of elite palace or fortress complex. A third structure created in that same early period later became the church of Danagel (the Virgin Martyrs). The Merkurios and Gabriel structures were built in highly defensible positions and may well have been the core of a fortified complex created during the politically unstable period that saw the disintegration of the Axumite Empire in the mid-seventh century A.D. At its peak in the third to sixth centuries A.D., that empire controlled much of northern Ethiopia and Eritrea, and at times Yemen and even part of the Nile Valley.go to the site:
www.archaeology.org/0411/newsbriefs/ethiopia.html

Medieval Heraldic Pendants
Click on the thumbnails for a much larger image! Below are both hanging pendants ,leather stud type, and rivetted types. As requested I have left a link on the bottom of the page to the previously sold pendants.
go to the site:
www.theinterestingshop.com/pages/heraldicpendants.html
Pubblicato da Italia Medievale a 07:09 1 commento: 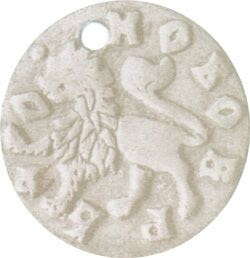 Medieval State of Zeta
The Slav peoples were organized along tribal lines, each headed by a zupan (chieftain). In this part of the Adriatic littoral, from the time of the arrival of the Slavs up to the 10th century, these local magnates often were brought into unstable and shifting alliances with other larger states, particularly with Bulgaria, Venice, and Byzantium. Between 931 and 960 one such zupan, Ceslav**, operating from the zupanija of Zeta in the hinterland of the Gulf of Kotor, succeeded in unifying a number of neighbouring Serb tribes and extended his control as far north as the Sava River and eastward to the Ibar. Zeta and its neighbouring zupanija of Raska (roughly modern Kosovo) then provided the territorial nucleus for a succession of Serb kingdoms that in the 13th century were consolidated under the Nemanjic dynasty.
Although the Serbs have come to be identified closely with the Eastern Orthodox tradition of Christianity, it is an important indication of the continuing marginality of Zeta that Michael, the first of its rulers to claim the title king, had this honour bestowed on him by Pope Gregory VII in 1077. It was only under the later Nemanjic rulers that the ecclesiastical allegiance of the Serbs to Constantinople was finally confirmed. On the death of Stefan Dusan in 1355, the Nemanjic empire began to crumble, and its holdings were divided among the knez (prince) Lazar Hrebeljanovic, the short-lived Bosnian state of Tvrtko I (reigned 1353-91), and a semi-independent chiefdom of Zeta under the house of Balsa, with its capital at Skadar. Serb disunity coincided fatefully with the arrival in the Balkans of the Ottoman armies, and in 1389 Lazar fell to the forces of Sultan Murad I at the Battle of Kosovo.
go to the site:
www.njegos.org/medieval/zeta.htm

Medieval Tales
True stories, fables, and anecdotes from the Middle Age.
Angels:
Visions of angels, of dead saints, of departing souls, and of the Other World were numerous in the Middle Ages. Angels mande revelations to saints, talked with them, aided them in danger; they were seen by them in conflict with demons. People saw one or many angels standing by holy men at their devotions. The Venerable Bede says of St. Cuthbert that he was often allowed to see and converse with angels, and when hungry was refreshed by food prepared by the Lord. St. Columbia was said to have received many "sweet angel visits," when sleepless or in solitude. go to the site:
http://www.godecookery.com/mtales/mtales.htm
Detail of wall painting in the church of S. Angelo in Formis,late 11th or early 12th century
Pubblicato da Italia Medievale a 08:55 Nessun commento:

Medieval Routes
work shop
The introductory presentation by Vince Gaffney discussed the major issues and the advantages for the project of computer-modelling systems, and was intended to set the scene for some of the later technical presentations. It considered key historical and archaeological issues related to logistics and military organization, and the relevance of digital technologies for their analysis. Specific emphasis was placed on the potential of GIS as a core technology for logistical study and a basic introduction to the nature and use of GIS technologies was provided for the benefits of participants not familiar with their use. Examples of relevant work were presented and the limitations of current applications and technologies considered.

Malcolm Wagstaff then presented a paper dealing with Network analysis, logistics and applied topology, since any analysis of the logistics of warfare must be concerned with routes and with nodes in networks of routes. Routes focus movement; nodes command intersections. Both are intimately related to the ways in which armies actually move across country and with the ways in which they are provisioned. Routes also mediate power, linking its loci with territory, its peoples and their use of land. They are essential to the exercise of control and the extraction of surplus. Thus, the reconstruction and analysis of the communications structure is basic to the examination of the logistics of medieval warfare in the regions proposed for study. The potential of graph theory in this respect and some of the indices that have been derived from it were discussed, some practical questions of making graph theory operational were presented, and some applications of graph theory published by Sanders and Whitbread were considered.
go to the site:
www.medievallogistics.bham.ac.uk/workshops/1/presentations.htm 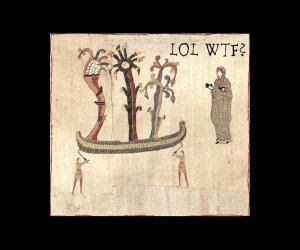 Medieval Plants
Civilizations as early as the Chaldean in southwestern Asia were among the first to have a belief in plants that never existed, and the practice continued well beyond the Middle Ages and the Renaissance. Originally, this was done to disperse the mystery surrounding certain seemingly-miraculous events and to symbolically embody in a physical form various aspects - wealth, happiness, fertility, illness, etc. Later, people began to invent "nonsense plants" to enliven the tale of an otherwise boring voyage, and with the invention of the printed book, to entertain readers who loved to believe in such fables. Even spices, which were an important element of Medieval food, commerce, trade, & society, were given exotic & incredible backgrounds. The fabulous trees and fauna discussed here are just a small example of the many fantastic plants our medieval forebears believed in. As will be evident, trees, because of their longevity and immensity, have been foremost among the plants considered sacred, mystic, or mythical.
Mythical Plants of the Middle Ages is based on the writings of Ernst & Johanna Lehner and William A. Emboden.
go to the site: http://www.godecookery.com/mythical/mythical.htm
Pubblicato da Italia Medievale a 08:02 Nessun commento:

Medieval colours
Series of cards with a design based on Medieval themes and on natural dyes common in Medieval times. The design panels all use textiles dyed with natural dyes on a base of handmade paper that often incorporates plant and vegetable artefacts.
Each 6" by 4" folded card (15cm by 10cm) is made from 100% recycled materials and bears a unique design on the centre of the front cover. The designs comprise a handmade paper background with a foreground of silk dyed with natural dyes and natural artefacts. All the cards are unique and the design may vary from the photograph. go to the site:
http://wildpaper.weebly.com/medieval.html
Pubblicato da Italia Medievale a 08:40 Nessun commento: