Marriage during the Middle Ages

Marriage during the Middle Ages
Weddings during medieval times saw the origin of several modern traditions and customs. There was more to the Middle Ages than just castles, chivalry, and fancy colours. It was a time of developement for many social and marriage customs followed by brides today. This era between the fall of the Roman Empire and the Reformation was unique and through it all, faith was the ever-present catalyst for artistic, intellectual, social, and political developments. Medieval marriage was still the province of the Church, and the sacrament of matrimony was central to Christian doctrine. Grooms, on the average, were much older than their brides. Noble women sometimes didn't marry until the age of 24, but this was rare. More than 3/4 were married before they reached 19. By today's standards, western Europe was inhabited by the young, with more than half of the population under 20 years of age. http://www.medieval-weddings.net/
Pubblicato da Italia Medievale a 08:14 1 commento:

Medieval Cakes
The center part (minus the turnable page) for my 65th birthday cake. Borders copy one from a medieval page along with my arms and the SCA symbol for the Order of the Rose. The arms and rose are on rice paper and painted with paste food colors. Left hand text is a "bastard" mixture of Latin, English and Spanish. Right hand page is a copy of text from a 16th century book of manners. Writing is done with a number 1 tip.
go to the site: home.netcom.com/~alysk/photos-medievalcakes.html
Pubblicato da Italia Medievale a 07:05 Nessun commento:

Medieval clocks
The Egyptians were big on sundials. The Chinese favored water clocks. In the early Middle Ages, time was first marked down the length of a candle in hourly increments. Next came large hour glasses, which were only good for an hour...or two.
Then, Brother Gerbert, who later became Pope Sylvester II, invented a simple mechanism in 966 that rang bells at regular intervals throughout the day to call his brethren to prayer. It was the beginning of mechanical clocks as we know them today.
Soon, cathedral towers were providing the rest of the faithful with their first glimpse of a right proper (although not always accurate) mechanical clock.
The earliest of these is credited to Jacopo de Dondi, who designed an astronomical clock for the cathedral tower in Padua in 1344. Curiously, almost every zodiac sign surrounds the clock face except for the balanced scales of Libra. (As the story goes, it was deliberately left out of the lineup by guild workers who felt they weren't treated fairly in salary negotiations.)
Strasbourg Cathedral's mechancial clock appeared in 1354, and was followed by the third, and most elaborate mechanical clock, built in Prague's Town Hall in 1410.
This being the Middle Ages, the Prague clock depicted earth at the center of the universe - with the sun, moon, and stars revolving around it. Blue and red halves separated day and night. With embellishments added over the centuries, today the clock remains a veritable funhouse of timekeeping.
go to the site:
http//.www.newyorkcarver.com/invetion4.htm
Pubblicato da Italia Medievale a 16:25 Nessun commento:

Medieval Ships
In May 1990 a wreck of an unknown ship was discovered in the course of the dredging of the left bank of the
Pärnu River by a newly built pier of the yacht club. The wreck lay embedded under a 30-40 cm layer of mud at the depth of 1.5 m of water. Before dredging was stopped temporarily, a certain amount of fragments of the ship's planks and ribs were taken ashore by an excavator.On May 24, 1990, a preliminary inspection of the wreck site was carried out by the researchers of the Estonian Maritime Museum . Having seen that the ship's wood was black oak, the researchers decided that the find would need most serious attention and detailed investigation, so the digging of the river bottom could not be continued.In July a thoroughgoing research of the wreck was made. The site of the object was explored by means of iron rods and the measurements of the find were ascertained.
go to the site:
http://www.abc.se/~pa/publ/paernu.htm
Pubblicato da Italia Medievale a 08:23 Nessun commento:

Castilian Medieval Theatre
This guide to castilian theater will ignore a theory asserting that dramatic activity never existed in Castile. Play of the Three Magic Kings is much more than an exception coming from Europe. It proofs the existence of a steady castilian dramatic tradition.
Things have changed after discovering of new texts and a comparative study of our theater inside a romanic context. Indeed finding of lost plays is always possible and can modify our present point of view.
Anyway, we still ignore wich were the literary works devoted to scene and wich were texts for an animated reading.
Tradition has chosen between the canon of possible texts, those that could be performed or not. We respect the scholar's authority when we introduce this exposition of medieval theatre, but we point out to the provisional nature of our view. Scholar authority let us go beyond the limits of year 1500: we stablish 1513 for medieval theater and 16th century for derivations of La Celestina.
We cannot even assert many things on performance of our masterwork, the Tragicomedy of Calisto and Melibea. These pages will be no more than a guiding introduction.
go to the site
www.spanisharts.com/books/literature/i_tecasmed.htm 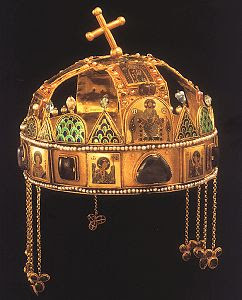 Art in medieval Hungary
This site serves as an introductory research guide to the art of the medieval kingdom of Hungary. The kingdom, founded in 1000 AD, covered a much larger territory than modern Hungary, and included areas such as present-day Slovakia, Transylvania (today in Romania), as well as Croatia. The kingdom reached its peak during the 14th and 15th centuries, under rulers from the Angevin, Luxemburg and Hunyadi families, but essentially collapsed during the Turkish attacks of the early 16th century.

The site contains information primarily about the art of medieval Hungary, but the topic is framed in a larger Central-European context, with links to sites dealing with the medieval art of Bohemia, Poland and Austria as well. The main goals of this page at the moment are to provide an up to date list of publications about the region's medieval art and provide fresh information about medieval art in Hungary, as well as to collect useful Internet links.
go to the site
http://home.hu.inter.net/~jekely/

EARLY MEDIEVAL CULTURE IN OHRID REGION
During the excavation of the early Christian basilica at the locality Plaosnik (Imaret), remnants of secular Slavic architecture were found. It is believed that this building dates from the earliest period after the migration of the Slavs on the Balkan. n the middle of the 6th decade of 20th century, during the examination of Clement's church of St. Pantheleimon at Plaosnik (Imaret), it was found that the church was established on the remnants of an early Christian trefoil basilica. In Clement's life the church was built onto towards the west. According to Theopilact of Ohrid's "Life of St. Clement", Clement himself built his tomb. It is presumed that the church St. Pantheleimon was refurbished and decorated with frescoes in XIII century. Some further construction works were carried out until XV century, when the church was destroyed and converted into a mosque.On the site of the classical theatre, in the layers of the medieval horizons, a large number of ceramic pots have been found. Their distinctive shape and ornaments obviously indicate that one of the main crafts of Slavs was pottery.On the line starting from Gorna Porta (the Upper Gate), the excavations revealed the existence of a road. On its Northwest side the remnants of the original gate and curbstone were discovered. The road stretched in the northeast-southwest direction and towards the classical theatre. It had as much as 7.4 metres in length, and the curbstone 0.45 m. All examinations indicate that it was used even in the late Middle Ages.On a number of archaeological sites in the old part of the town several water reservoirs, underground pipelines, and large number of drains were found. This confirms the well-known thesis according to which Ohrid was a real centre in the Middle Ages, developed according to the example of the series of famous centres.
go to the site:
http://www.ohrid.org.mk/eng/istorija/ransrvek.htm